Call Us Today for a Free Debt Analysis! 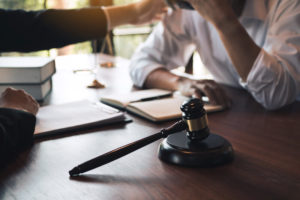 Johnson Mark is a debt collection law firm. Given that it’s an actual law firm, debtors are often scared by its collections efforts. If you have received a Summons and Complaint from Johnson Mark, you may be unsure about what to do and apprehensive about what to do next. You probably do not have the time on top of your ongoing commitments to deal with the legal process. You probably want to know how to settle the debt and make Johnson Mark an unpleasant but distant memory.

This is where Northwest Debt Defense comes in. We have helped thousands of debtors in Oregon and Washington save money by negotiating debt settlement payoffs for only a portion of what they originally owed. We’re ready to get started on your matter now.

Johnson Mark is a law firm focused on debt collection. They represent creditors in all counties in Oregon and Washington. Johnson Mark mainly represents major financial institutions, commercial lending operations, and medical facilities.  The firm is generally fairly reasonable in negotiating with attorneys.

Being sued by a debt collector is a serious concern. If you’ve been sued by Suttell Hammer, it is important to know where you stand.

Debt lawsuits start with a complaint and summons. The complaint will contain allegations concerning your alleged debt. The complaint will state your identity as well as the balance to date. The summons contains the requirement for you to answer the lawsuit. Debtors typically have 30 days after they are served to file an answer to the lawsuit. Ignoring a lawsuit could result in a wage garnishment being issued, where a quarter of your wages are deducted from your pay until the debt is paid off, a lien on your home, or in bank levy where the contents of your bank account are emptied without notice.

Some debtors stay in denial, thinking that if they just ignore the matter, the plaintiff will somehow give up. This is unlikely to be the case with Johnson Mark. The bottom line is that in the end, Johnson Mark will likely find a way to meet the court’s service requirements and obtain a judgment.

After Johnson Mark Serves You

Read the Complaint and look for any inaccuracies. Maybe you are not the individual identified in the complaint. You also need to check the amount of money for which you are being sued. Is it actually correct? Maybe the debt is legitimate but time barred by either the Oregon or Washington Statute of Limitations. Check for any and all mistakes and take note of them.  If you find an inaccuracy, you should call a debt relief law firm like Northwest Debt Defense.

What Does Johnson Mark Do With The Judgment?

A judgment enables Johnson Mark to take additional actions to take your money from you, such as repeatedly emptying your bank account,  garnishing your wages, or, under certain circumstances, placing a lien on your home.  Not only are there multiple ways for Johnson Mark to satisfy its judgment against you, the firm has every incentive to do so.

And there’s more bad news: You can expect interest to continue to be tacked on to the debt after the entry of judgment. The original amount you owed could be supplemented by attorney’s fees, interest, and court costs. Johnson Mark will continue pursuing you and using whatever tools it has at its disposal to satisfy its judgment.

Remember that you have options, including debt settlement.

How Debt Settlement Can Resolve Your Lawsuit

Even if you’ve already had a judgment entered against you, debt settlement is still an option. Obviously, debt settlement is much more effective if you take action sooner rather than later. Johnson Mark is not going to be nearly as agreeable to settling once they have a writ of garnishment sent to your employer. Reach out to a debt settlement attorney.

A debt settlement lawyer can normally work out a payment arrangement with Johnson Mark. One possible approach is to make a lump-sum payment for less than what you owe. The larger the lump sum offer, the more negotiating power you have. If you can only afford monthly payments, chances are, the debt can still likely be settled for a discounted amount. Northwest Debt Defense is here to help.

Debt is stressful, and a lawsuit makes it a million times worse. That’s why debt settlement is such a powerful tool. When you retain Northwest Debt Defense, our firm will immediately get to work for you.  One nice aspect of debt settlement is that the fees are completely predictable and low. We only charge flat fees for cases settled prior to trial. Most of our clients are looking for exactly that: Speedy resolution designed to make a Johnson Mark lawsuit a distant memory so they can go on with the business of living.

In Need of Debt Defense? Call Us!